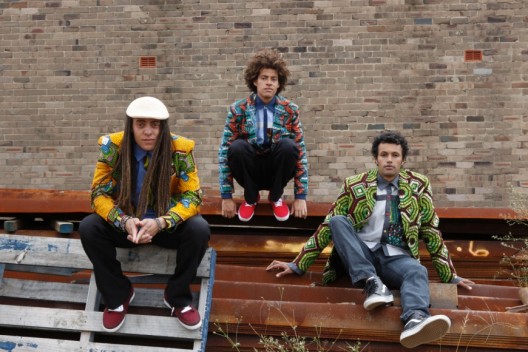 The diversity of material, easy stage presence, and sheer musicality was on display for all to see, these guys have got mad skills, the sky’s the limit … these guys are the complete package, combining effortless flows with a full on ‘live’ show.

True Vibenation are a rare talent combining youthful enthusiasm with a mature sound and a strong DIY attitude.

With each member playing horns as well as handling writing and production duties, the trio signals a new generation of hip hop artists who pay homage to the sharp lyricism of the past but enlist an updated production aesthetic combining synths, warm samples and live instruments with banging 808 drums and unique rhythms.

Made up of African/Australian twins Verbaleyes and Native Wit and childhood friend Klue, the trio hailing from Sydney’s inner-west, has developed a solid reputation for an electric live show and sound which is just as comfortable alongside a live band as it is in an electronic setting.

Since releasing their debut album ‘The Sunshower Phenomenon’ through Big Village Records, True Vibenation has been going from strength to strength. The album was named as the Triple J Hip Hop show’s ‘Album of the Week’ and snapped up for rotation. On the back of the album’s success and reputation for their live performance, True Vibenation sold out their album launch at Sydney’s iconic Annandale Hotel and toured the country twice, wowing audiences with their infectious energy and a live show which sees them go beyond the traditional hip hop format of two turntables and a microphone and transform into a blasting horn section and live beat making band.

‘The Sunshower Phenomenon’ brings a fresh approach to hip hop, blending elements of Afro-beat, jazz, dubstep, soul and latin music to create a sound that could have come out of anywhere in the world, yet is distinctly Australian.

True Vibenation has always been a group to embrace the live format honing their skills over the years playing hundreds of shows, festivals such as Sydney Festival, Peats Ridge, Future Music, Woodford and Changing Lanes and support slots with Chali 2na, Dead Prez, Das Racist, Foreign Beggars, DJ Kentaro, Horrorshow and many more.

With their diverse sound, natural stage presence and killer live show audiences are in for a taste of a group really starting to come into their own with a growing buzz and fan base.